Captivity has been on the news a lot lately. Anti-SeaWorld protests, death of baby dolphins, new act against captivity, etc.

Maybe you haven’t given that issue a lot of thoughts: for or against?

There was a time when I didn’t give that matter a lot of thoughts either. A time I would apply for a job working with dolphins in a tank, a time I would secretly dream of becoming the head manager of the orca tank at Marineland.

Then, I read a lot on the subject. I’ve made a list for you of all the facts told by scientific teams, doctors on marine biology, etc.

10 facts to show you the hidden side of captivity. What people in the business of captivity don’t want you to know.

You demand, they offer. They depend on you.

1) A captive cetacean has a shorter life expectancy than a wild one:

In the big wide, limitless ocean, a wild dolphin, free, can swim up to hundreds of km per day! A locked up dolphin, however, swims in circle in his tiny tank, aimlessly – often until depression and suicide (Flipper killed himself). His lifespan is shorten by half and his death rate for captive-born is very high.

Researchers in cetology have determined an average life expectancy for wild killer of about 30 years for males and 50 years for females. While female orcas can live as long as we do, and sometimes longer, as it was the case for Granny, who died at an estimated 105 years old.

In 1995, governmental Scientifics Robert Small & Douglas DeMaster analysed survival data of adult orcas – wild and in captivity- over 1988 to 1992. What they discovered was profoundly unsettling. “The survival of the wild population, studied on approximately 250 adult orcas, was considerably higher than the one of adult captive orcas”. They found an annual death rate of 6.2% among captive orca, against 2.4% for wild orcas.

2) “No aquarium, no tank in a marine land, however spacious it may be, can begin to duplicate the conditions of the sea. And no dolphin who inhabits one of those aquariums or one of those marine lands can be considered normal.” (Jacques Cousteau)

Compare this to the fact that wild dolphins can swim up 160 km per day hunting their food, you begin to understand why holding one captive in a tank is denying cetaceans’ basic rights in life.

3) Captive cetaceans are controlled by food:

A common dolphin can swallow up to 25 kg of fish per day! A fish for a trick is a thin reward. 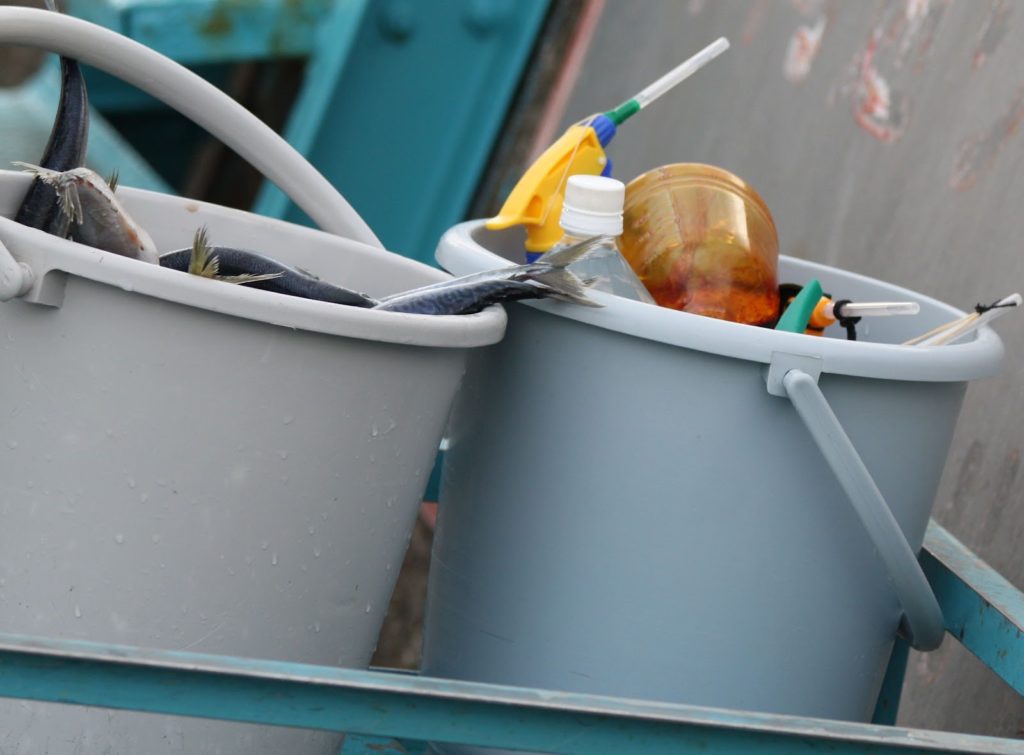 As soon as they are full, dolphins cease to obey orders. Richard O’Barry, , Flipper’s ex trainer, explains this in an interview. This is why they had to use 5 different dolphins to record the series

4) Dolphins in marine parks are, most often, captured from the wild:

While a great number of dolphins in marine park are born and raised in captivity, many dolphinariums and swim-with programmes still take dolphins from the wild. 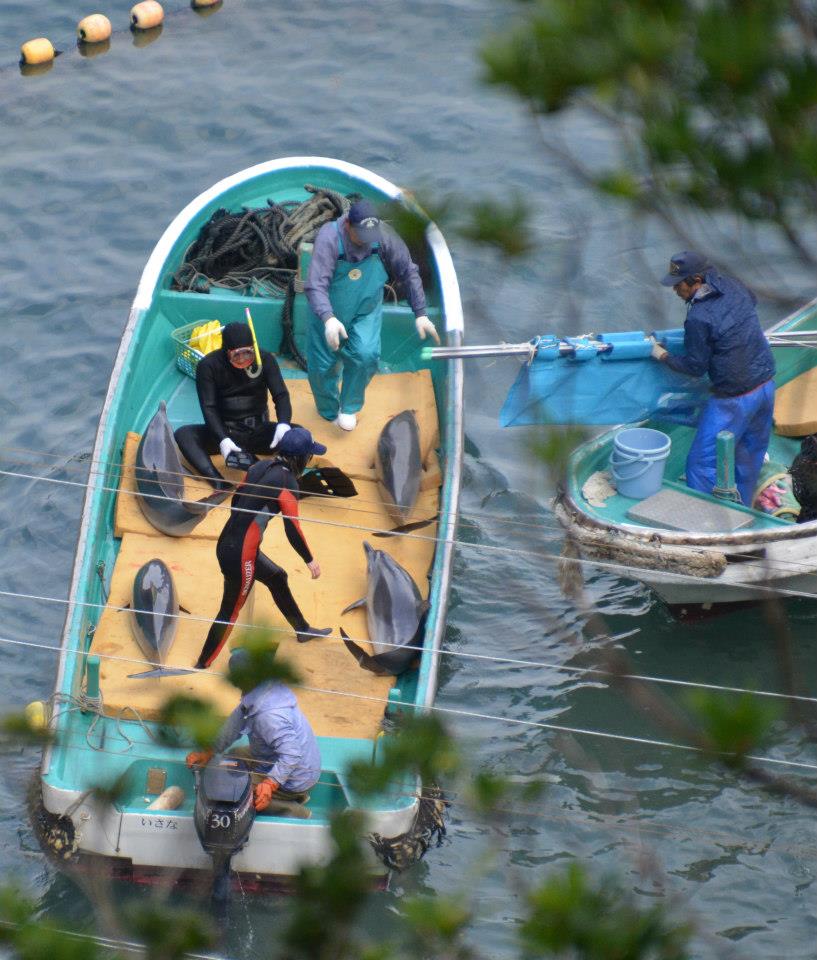 Most of them are captured during a barbaric drive-hunts. The most notorious of them being the ones occurring in Taiji – the infamous Cove.

Described in the movie The Cove, Japanese fishermen attract between 1500 and 2000 dolphins in the shallow floors of the cove, selecting those deemed to be sold to marine parks. The rest of them is being slaughtered for their meat.

Today, it is forbidden to capture orcas in the United States, so they hunt in Russia France is no longer allowed to import animals.

5) Marine parks participate in a wrong form of education

Seeing locked up cetaceans, sick and stressed, doing tricks does not contribute to educate the audience about their behaviour. The staff will tell you that the animals enjoy doing tricks, that they’re happy to be there… 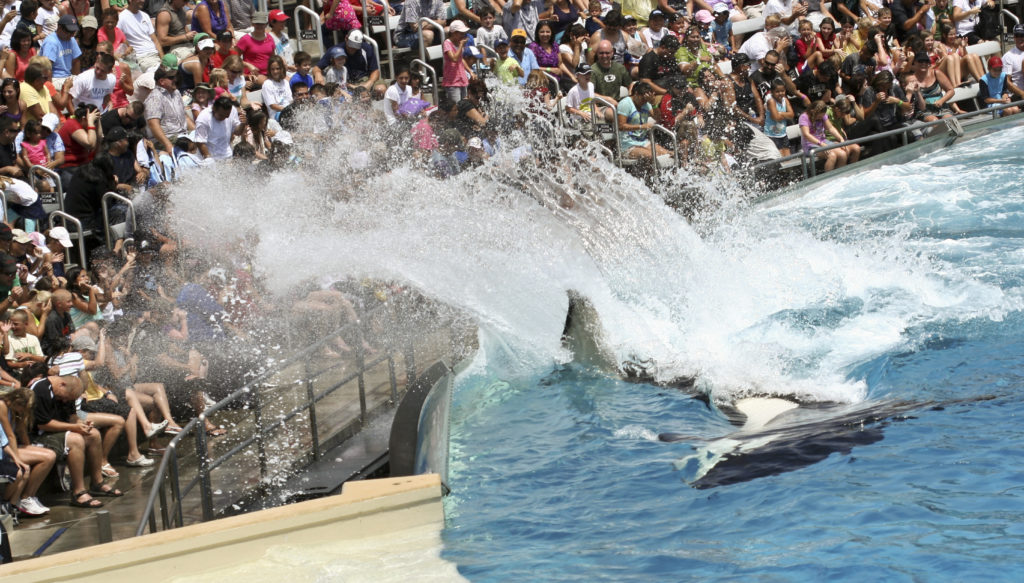 But we’re talking about wild animals who have their right to freedom and who are not on this planet to entertain us.

“What’s wrong with having a few of them in here (tanks) when there are thousands of more in the wild?”

If men could put a blue whale in a tank (biggest animal on Earth), they would. Just because it is possible, doesn’t mean it is ethically moral.

6) They don’t have the same brain as us. It is bigger and has a whole area that we don’t have! An area for social links…

Cetaceans are extremely social. We regularly hear about massive beaching. Indeed, when one of them beaches, others follow. Reactions we struggle to understand, and yet we consider ourselves as the evolved one.

Wild dolphins travel among groups of 10 to 200 specimens! In captivity, this family bonds are artificial since we mix several animals in the same tank. Why lock up a small group when we know they travel in mega pods? 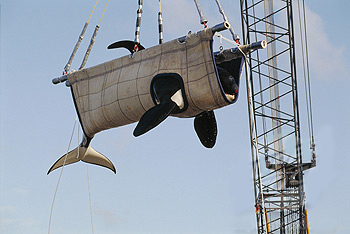 When a baby orca is born in a marine park, it is most often separated from its mother to be transferred to another park.
Their social structures are complex, and most are organized in matriarchal societies. Children stay with their mother during their whole life, who teaches them their own culture and dialect.

Each society of orca is different. For example, orcas in Argentina beaches themselves to hunt. Orcas in New Zealand don’t know this hunting technique, however, they know how to hunt rays.

It is extremely traumatizing to separate a baby from its mother. Trainers who took part in this type of abduction witnessed distress and suffering from the animals.

Each day, trainers distribute medical prescription to their “collection” of orcas.

They’re fed with dead fish deprived from any nutriments or water. 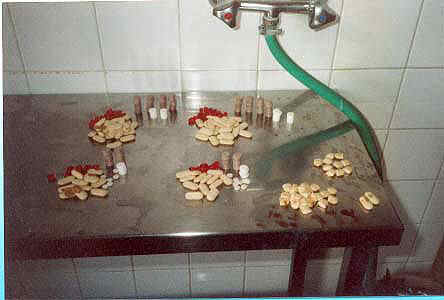 Before breakfast, trainers had to stuff gills with pills and vitamins. These pills could very much be antibiotics since they were only given to an animal said to be sick or “slow”.

When an animal was sick or dehydrated, it would be given shots of herring mixed with water.

Whales cannot drink sea water. They rely on the water contained in their preys.

In order to keep up witth their collection of orcas, marine parks are willing to go very far…

We are talking about creatures which are self conscious, know and understand what’s happening.

Tilikum, featured in the movie Blackfish, was a real sperm bank. It isn’t impoosible that his sperm has been sold to other marine parks worldwide in order to diversify the genetic pool of each tank. 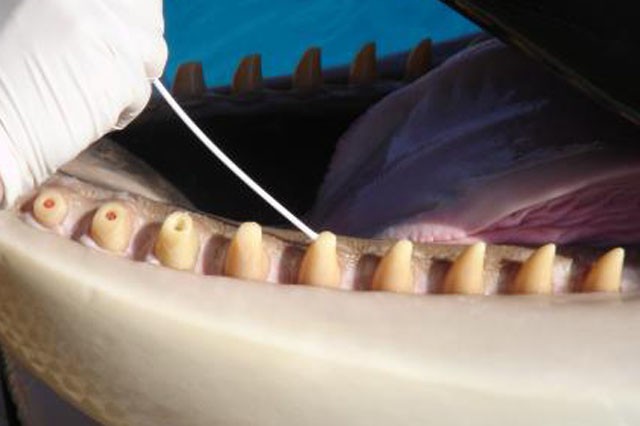 The richness of the ocean being their habitat, weather orcas are born or not in captivity, they all react in the same way when it comes to their enclosed concrete environment: they swim endlessly in circles, they float aimlessly, they chew the concrete walls of their tank (which causes an almost complete loss of their teeth and severe digestive issues because of the indigest paint), they beach themselves to escape the mood swings of the other orcas or they violently bang their head against the walls of the tank (Hugo died that way).

Think about it: you visit a marine park for a day, you see the dolphin and orca shows. Out of the 3 daily shows, you might be lucky to see two!
That goes without counting night shows during the summer! Then you come home at the end of the day, with a lot of memories! 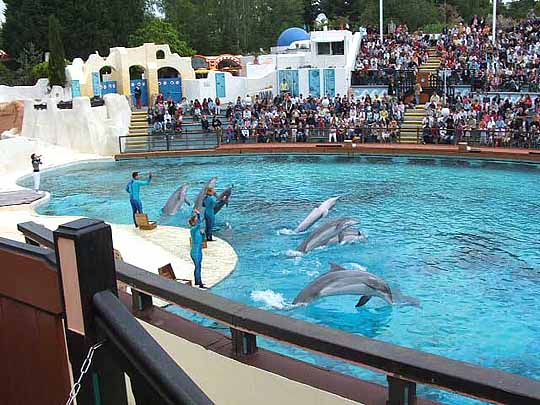 And the day after, you do something different, you have free will.
NOT THEM. Day after day, pneumonia or not, the show must go on.  Even as children, animals are tamed as early as doable to participate in as many shows as possible.

They have nowhere to go and nothing to do in this virgin bleached environment. The ocean is so rich: fauna and flora. Unlike these pools.

The day after your visit, or a week later, or a month, or 5 years, their situation stays the same. In their eternal tank, doing the same tricks to get frozen fish.

Your call to decide on which side you want to be :

And if you want to see whales and dolphins, there are so many “whale watching” organisations available world wide!

No need to travel very far… 😉 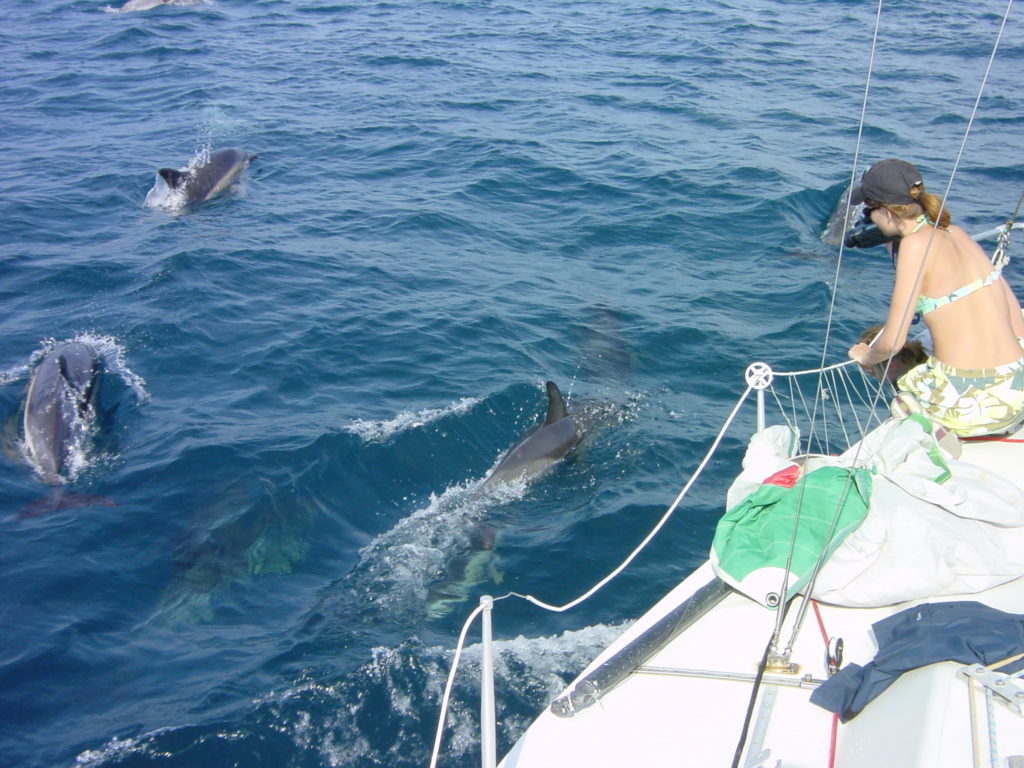