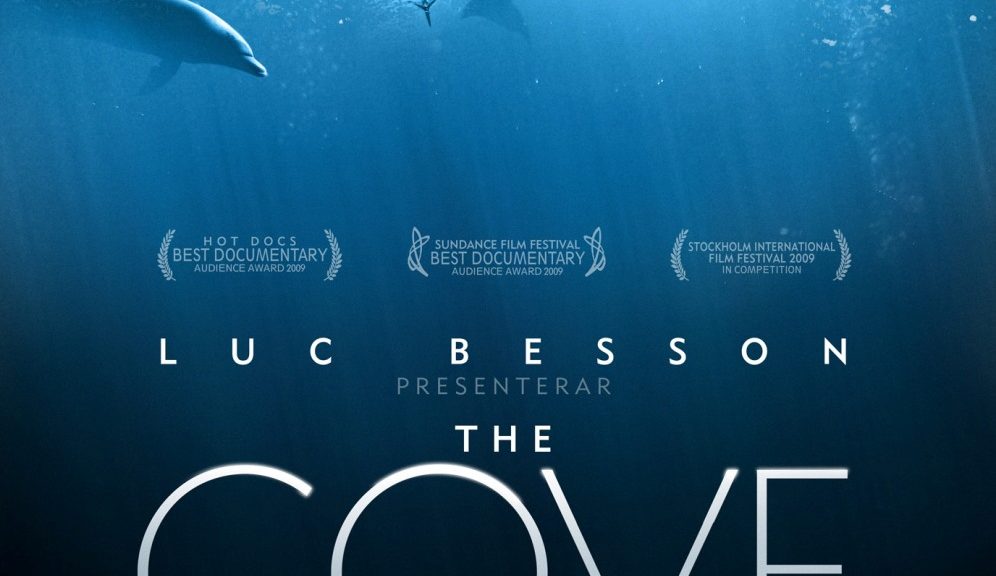 One of the major phenomenon for the protection of dolphin is certainly the one related to THE COVE. It is a documentary movie led by Flipper’s former trainer, Ric O’Barry, who today is a cetacean activist. Taiji, Japan, is where he acts against the massacre of thousands of dolphins per year, operated in secret.

With Oceanic Preservation Society team, O’Barry and his partners decide to reveal the truth about Taiji to the world. Despite the hostility of the local police and fishermen, O’Barry and his teammates gather a very qualified team: framer, recorder of under-water sounds, special effects specialists, oceanographer and renowned divers and launch themselves in a secret operation aiming at gathering pictures of that isolated cove…

I found on this website a text which explains very well the reality of The Cove:

The Cove is an engaged and denunciatory film. The title is a reference to a small cove situated in Taiji, Japan. Each year, between September and Mars, local fishermen gather very big groups of dolphins. By disturbing their sonars, they manage to disorientate them and draw them within the cove thanks to massive fishing nets.

It is in this cove (part of a national nature park) than happen afterwards a grisly event. Fishermen first select the dolphins: the prettiest will be selected to be sold to marine parks, at prices that can reach up to 150 000 $! But what happens to the other thousands captured dolphins?

The information can shock… Those latters will be sold for their meat, which will end up on market shelves, or in Japanese restaurants or even in school restaurants! A dead dolphin costs approximately 600 $.

This blood bath which victims are sensitive and intelligent beings is a show difficult to cope with. Contrary to what declares Joji Morishita from the International Whale Commission (IWC), the dolphins are neither killed instantly nor killed in a human way: fishermen ram a steel stick of approximately 12 inches in the dolphins’ blowhole. And, in order to prevent an excessive bleeding and the water to turn red, they insert a wooden stick in that same blowhole, prolonging their agony for many long minutes. The movie ends with shootages of death sentences – shocking sequence aiming at showing the reality of it and make the viewer react.

Because this cove is not an isolated case. Each year, from all around Japan, not less than 23 000 dolphins are killed for their meat.

The source of these massacres is not only coming from Japanese consumers (less than 1% of the population) of dolphin meat. It is also linked to the multi-billionaire industry of marine parks, which constantly needs new specimen in their parks. But, dolphins do not reproduce themselves as easily as they would in the wild. New “clowns” have to be abducted from the sea, and most of them come from the Taiji cove.

Today, Monday the 17th of December 2012, after 6 days being imprisoned in the cove, 126 members of the pod were taken: 101 for captivity and 25 for human consumption (including the 2 juveniles that died during the capture process). The rest of the dolphins swam free – after having sustained serious injuries and terrifying memories that will last a lifetime.

Most mothers will swim away without their young… Those dolphins will now entertain humankind until the day they die.

Say no to captivity – the ocean is the ONLY place that we should ever see marine wildlife.